Our Backstory; The Wrap-up

So we finished out the school year and I headed home for the summer; Charlie visited me and learned how to change a diaper (I was working as a nanny), I went with him to visit his parents and learned to build the most amazing bookshelves (he and his parents are amazing DIYers).

My junior and senior years pass as you would expect; lots of hard work, seeing each other when we could.  During this time Charlie's lab closed and he had to find a new one but luckily found another at PENN.  So as my senior year moved past the halfway point and I started planning for life after graduation; talk of marriage which had largely been theoretical became much more practical.  Charlie felt strongly that (perhaps because of our age difference) it was important that I live on my own for awhile, first job ~ first place.  And the whole married/priestly vocation question was still lurking around the edges.  I went along mostly because it seemed very important to him (totally glossing over the many, many discussions where I described our lives as wonderful and was convinced that at 22 I had it all figured out) and knowing that even if engaged we would mostly likely not get married until he was closer to finishing his degree.

So began our almost five years of long distance dating;


Lots of emailing, late night phone calls and visiting when we could.  Luckily during the CT-PA years once I had finished orientation I had a fairly predictable schedule as far as weekends off.  And it seemed as if those years prepared us for the year and a half when the distance was much greater and the visits were months apart.
In February 2000 having completed my Master's and taken my midwifery boards I moved to Houston to join Charlie, and what followed was a wonderful year of seeing each other regularly, joining a wonderful church where I made friends I have to this day.  What it didn't include was a job in midwifery or a proposal.  Charlie had accepted a fellowship in Pediatric Hematology/Oncology back in Philadelphia and while I promised to look nearby job wise I also said that unless we were engaged I felt I needed to move wherever I could get a job.

One of the things both of us wanted to do before moving back East was visit San Antonio and the Alamo so one day in April of 2001 we head out to drive the three hours.  About an hour into the drive Charlie started in very serious tones a SOTR (state of the relationship) talk and as he was very serious and seemed a bit sad all I could think was "Please don't break up with me now, I'm trapped in a car with you and we are headed away from home!!"  He wasn't, but felt obligated to point out the years of study ahead of him, the challenges of being married to a physician and whatever else he felt I should consider before deciding to marry him.  As if dating a med student and resident over the past eight years  had not made those things evident!  ANYWAY... I said Yes! and it put a certain rosy glow to the day which is good because by the time we got to San Antonio it was pouring ~ but we were happy and so like two drowned mice we walked around the Alamo and up and down the RiverWalk and then had dinner where they got our orders completely wrong.  The rain did stop in time for us to drive into the loveliest of sunsets heading back to Houston.


Epilogue: Our Wedding was December 28, 2002 and was to be in the parish bordering the PENN campus because it had been decided way back in 1993 by the Archdioceses that daily Mass could continued to be held at the Newman Center but Sunday liturgy could only be offered at the Church (I was actually the last Liturgy Chair after me it became the Spiritual Committee).  Except that two weeks before the wedding a huge piece of the ceiling fell and the church was closed until deemed structural sound ~ and since we were having a small wedding we married in the Chapel at the Newman Center where we had met ten years earlier. 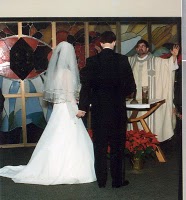