Having enjoyed a lovely Thanksgiving with delicious food enjoyed with family as warm, happy memories are shared and new memories are made. I now turn my attention to Advent and preparing my home and myself for Christmas.
Advent begins today and as I was setting up our Advent wreath and thinking about the other preparations I would make this week both inwardly and outwardly I could not help to wonder about the preparations Mary and Joseph must have made for their journey.
Outwardly they would need transportation and provisions for the journey, probably offerings for the census officials and rabbis. But what about inwardly, did Mary anticipate that she would deliver while away? Did they sense that they were leaving their home for many years? What prayers did they offer?
Happy Advent! Let us journey together to Bethlehem!
Posted by Joy at 2:27 PM 1 comment:

In Gratitude and Thanksgiving!

Giving thanks for:
a warm happy home
to gather together and eat
delicious food prepared by my hard-working,
cooking loving husband.
To be shared with family and friends
including a happy, cuddily toddler
as we give thanks for many wondrous gifts of God
the greatest of which is his love.
Happy Thanksgiving to You and Yours!!
Posted by Joy at 12:00 AM 2 comments:

1. When you were little, what did you want to be when you grew up?
A nurse, and olympic gymnast. Well one out of two is not bad.
2. Name 3 of your irrational fears.
Very afraid of being burned, getting yelled at, and rodents.
3. If you had a $200 gift card to any store, what would you want it to be? (Nothing responsible allowed. Can’t be used for groceries or anything)
Borders for books for me, or Gymboree for clothes for E.
4. What is your most (blog-friendly) embarrassing moment?
While sitting on an old bench I leaned over to kiss my boyfriend, the bench snapped and collapsed down breaking a bone in his foot.
5. If you were only allowed to eat one thing for the rest of your life, what would you choose?
Hot: French Fries
Cold: Fruit (berries)
6. What was your favorite toy growing up?
A couple dolls
7. Do you have a “go to” outfit? What is it?
For everyday: Jeans and a black top
For dressier: Khaki skirt and sweater top.
8. Who was the best teacher you ever had?
Dr. Hatch: Biology, though I also adored my kindergarden teacher Mrs. Barnes
9. If you could buy any car right now (something at least SORT OF within the realm of reality…so, you know, a Rolls Royce may not qualify), what would it be?
A current Subaru Forester, I like the car & company: Ours is 9 years old.
10. How do you reckon that Chelsea comes up with 10 of these questions every week? It was hard! What’s your theory on how she’s so creative? Are you going to help her?
Yes I think she is very creative and ingenius. However I am happy to help and offer question ideas
Thank you to Chelsea for hosting this funny and creative round-up.
Posted by Joy at 9:27 AM 1 comment:

Please visit Conversion Diary and enjoy the rest of the round-up.
Thank you Jen!!
Posted by Joy at 8:57 AM 3 comments:

Today I'm giving thanks for:
Walks in the sunshine
Hard-working husband
My daughter
Friends & Companions on the Journey
Posted by Joy at 8:27 AM No comments:

1. What are some of your family traditions?
From my family of origin: Putting out our shoes for St. Nicholas, King's' cake on the Epiphany
From my husband's Family: Sharing the oplatki wafer on Christmas Eve, Offering Easter guests a platter of food including egg, sausage, candy, bread, butter, salt, etc

3. Do you subscribe to any magazines? What are your favorites?
Newsweek, America, Cooking Light, Money, & Oprah

4. What are your top three favorite office supply items? (If you don’t share the love of office supplies with me or if you are male, you may skip this question.)
Post-its, colored file folders, colored pens

5. Are you a good public speaker?
Terrified to start, But tend to do well once I'm actually speaking

6. How do you feel about acronyms?
Can be fun, can become annoying as people create a whole new language
7. What’s the most creative things you’ve ever done? (Bloggers, feel free to include pictures!) 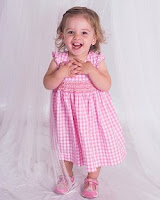 With my husband's (and God's) help I made a person:
8. I’d rather jam a pen in my eye than…
Sing in public
9. What company has the best advertising?
Northern Mutual, McDonalds
10. When is your birthday?
Middle of May
Thanks again to Chelsea of Roots and Rings for hosting
Posted by Joy at 6:47 AM 1 comment:

Please visit Conversion Diary to enjoy other Quick Takes hosted by the wonderful Jen
Posted by Joy at 11:42 AM 3 comments:

Today I am giving thanks for:
A loving husband who encourages me to try new things
The encouragement of friends
A warm, dry place to come in from the rain
The cuddily toddler who fills my world with light and love
That I am saved by love
Visit Faith & Family Live to read of others successses and share your own
Posted by Joy at 9:23 AM 2 comments: 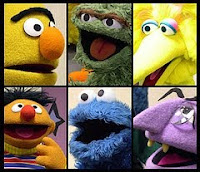 As my husband was part of the first generation to watch Sesame Street, and I the next (or third; still not sure how one counts generations culturally) it has been one of the few shows we will let Elisabeth watch. So it was with great pleasure that we together watched the 40th Anniversary episode yesterday; when the number of the day was 40 and Big Bird considered moving upon learning that many birds migrate only to realize that Sesame Street was the perfect habitat for him.
While the character she is most likely to recognize Elmo did not live on the street when I was first watching, much of the same excitement and pleasure exist as together we enjoy the adventures of Ernie & Bert, Super Grover and other constant friends of mine whom I am grateful are still around for Elisabeth to make their acquaintance.
Sunny days indeed!
Posted by Joy at 1:06 PM No comments:

1. What gift are you most proud of giving?
Many, many years ago I found the perfect St Nicholas statue to give my mom. Then every year after I would give her another figurine for St Nicholas day. I only found out years later that for the first many years she had thought it was my dad and when she found out it was her (then) teen-age daughter surprising her she was really touched.
2. What’s the best gift you ever received?
For my twenty-first birthday I received a sapphire ring which originally belonged to my great-grandmother
3. In honor of my husband: What’s the worst injury you’ve ever had?
In a bad fall of the balance beam I tore all the lower arm ligaments connecting into my right wrists. The doctor later told me a broken bone would have healed easier (still had to wear a cast for seven weeks).
4. They say everyone gets 15 minutes of fame. Who’s 15 minutes has gone on far too long? (The Gosselins are not acceptable answers, be more creative.)
The Kardasian Girls
5. You have 20 minutes and $1000. What do you buy?
Plane tickets to Belgium (and/or Ireland)
6. Tell me three blogs that I need to read.
My Life in Transition
Sweetness in the Small Stuff
Momopoly
7. Would you rather go without pizza or ice cream for the rest of your life?
Pizza (am actually eating ice cream as I answer this)
8. Would you rather go to a beach or a snowy mountain?
HARD Decision: Beach wins by a hair
9. Are you a night owl or a morning person?
Was a morning person, grad school and marriage turned me into a night owl, parenthood is turning me back
10. What word do you always misspell?
Oppurtunity (how I usually spell it)
Thanks again to Chelsea of Roots and Rings for hosting.
Posted by Joy at 10:52 PM 1 comment:

It is time again for Saturday Evening Post hosted by Elizabeth Esther where we celebrate and revisit good posts from the past. For this month I selected the post acknowledging my hundredth post~a chance to look back and forward in gratitude for my wonderful readers.
Please visit and enjoy the rest of the Saturday Evening Posts!
Posted by Joy at 7:28 PM No comments:

Enjoy the rest of this Friday's round-up at Conversion Diary hosted by Jen
Posted by Joy at 8:22 AM No comments:

Today I am giving thanks for:
Nice visits from family
A giggly happy girl who can very nearly jump
A wonderful husband to A-frame with
Sunny crisp days to enjoy the last of the fall colors
God's love and forgiveness
Please visit Faith & Family Live to enjoy the rest of the Small Success round-up and share some of your own.
Posted by Joy at 10:26 AM 3 comments:

1. What animal should cease to exist? (Not including bugs. That’s too obvious.)
Rats: I appreciate the need for rodents (I guess) but find rats beyond the pail
2. What was your favorite thing about the beach?
Almost everything, I love the smells of the seawater, watching the waves roll in, jumping and swimming in the water, walking the shoreline, and time spent with family
3. If scientists found a way to
allow dogs to talk, do you think we should implement it? Or should we just keep them quiet?
Yes, I think it would be fascinating.
4. How do you order your Starbucks?
Politely (Just kidding): Usually Grande Mocha, in the summer Grande Ice Mocha no whip and currently
Grande Pumpkin Spice Latte
5. What’s worse? People who don’t know the difference between your and you’re OR people who don’t use smack their food?
Hard call, but I'm going to go with smacking
6. What CD can you listen to over and over?
Rich Mullins; Liturgy, Legacy and Ragmuffin Band
Amy Grant: Greatest Hit, and Songs from the Loft
Peter, Paul and Mary: Around the Campfire
7. What was the most surprising thing about college?
How much I learned about myself outside the classroom in friendships I formed
and the issues that became important to me
8. What’s the best deal you ever got? (Biggest sale item.)
Don't know if this is the best but most recently got a small Fisher Price Dollhouse for $7 at a yard sale
9. Who is your role model? Why?
My aunt who raise a family, had a satisfiing nursing career and now in
retirement travel the globe with her husband!
10. What movie would you like to see that is in theaters right now? Why?
??
Thanks to Chelsea for once again hosting!!