We raked ~ she jumped and threw them in the air! 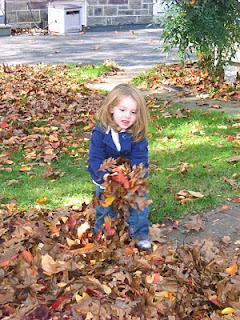 His first Halloween, her first time actively Trick or Treating 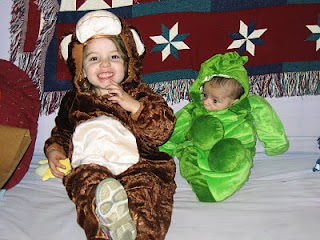 Bonus: This post!!
Giving Thanks This Thursday for:
newborn smiles
raking with toddlers
colors of creation
A-framing husbands
ice coffee
bloggers who share their wit and wisdom
God's love everlasting
Please visit Faith and Family Live and share your successes.
Posted by Joy at 11:09 AM 2 comments:

1. What is your favorite decor item in your house?
The artwork in our dining room, it is a wonderful mix of new and old pieces.
2. What is your favorite hair product?
Pretty boring but Pert Plus ~ have been using it for years and am very happy
3. Are you a good dancer?
Decent, thanks to my gymnastics background but am aging out of knowing what is current.
4. You get some good news, who’s the first person you call?
My husband
5. Would you rather take pictures, or be in pictures?
Take the pictures
6. What is your shoe style?
Cute, comfy slip ons
7. How often do you eat out?
About once a week
8. If someone has food in their teeth, do you tell them?
If I know them, yes
9. Do you fold your underwear?
Yes, but then sometimes shove them into the drawer ~ oh well
10. Milk, dark, or white chocolate?
Dark ~ always, Milk ~ sometimes, White ~ rarely
Please visit Roots and Rings hosted by Chelsea to enjoy others answers to these questions
Posted by Joy at 7:38 AM 4 comments:

Why I Love My Husband, vol 1 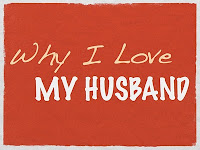 Picking up a wonderful idea started by Kaitlin of More like Mary ~ More like Me
Thank you for being you
Posted by Joy at 10:42 PM 2 comments: 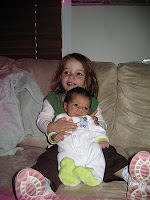 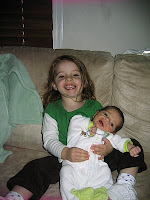 Please visit Faith and Family Live to celebrate your own small successes!
Thankful this Thursday for:
Posted by Joy at 7:12 AM 5 comments:

Ten Things about Liam at One Month 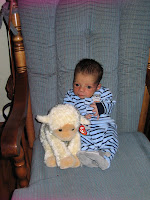 1. The yellow tint about his skin is nearly gone
2. During his quiet alert periods he is better and better about making and maintaining eye contact, though much of the time I have no idea what he is looking at so intently
3. So sweet listening to Lisbeth try and comfort him when he is less than thrilled to be in the carseat.
4. A good nursling, it is his preferred way to fall asleep
5. In the category of something I never thought I would be doing: sitting on a couples panel at Pre-Cana while nursing. Luckily he did not mind being under-cover or rather Udder Cover (tm).
6. Hates his bath but seems to enjoy diaper changes ~ which incidently Lisbeth loves helping with and so she pulls her little stool over to the changing station to be of assistance.
7. Has only been peed on me once. Hoping to maintain that once per month ratio
8. Will often cluster feed in the evening which makes getting dinner a bit of a challenge, but does tend to sleep for 3+ hours at a stretch at night.
9. His grins at gas bubbles are a great preview of things to come.
10. Fits just right in our home and heart!
Posted by Joy at 8:03 AM 4 comments:

1. What does your work out schedule look like?
At the moment ~ none
2. What is your favorite machine to use at the gym?
When I did belong to a gym ~ elliptical trainer
3. What is your favorite class to take at the gym?
Mom/baby swimming :-)
4. Where do you shop for work out gear and clothing?
?Target/Old Navy?
5. If you can’t go to the gym, do you have a favorite outdoor activity?
Hiking (also swimming, but that is more seasonally dependent)
6. What about a favorite work out DVD? If so, please share!
10 minute Pilates
7. Are you more active now or when you were in high school?
Hard call ~ I exercised more in high school, but motherhood keeps me on the run in a very profound way
8. How has your dieting/working out philosophy changed since high school?
It is more about feeling good rather than looking good now
9. What do you do while working out– (i.e., day dream, read, listen to music, gab with a friend)?
By myself ~ daydream and listen to music, but really enjoy hiking and talking with friends
10. What working out resolution would you like to make for yourself this year?
None really!
Please visit Roots and Rings to enjoy others take on this weeks quesstions
Posted by Joy at 9:12 AM 1 comment:

Blogs worth a check!

I'm giving Quick Takes a pass this week, but please head over to Conversion Diary to enjoy others take on the week.
Also all week, This Heavenly Life has been running a wonderful series on Breast Cancer Education.
Happy Weekend!
And to those of you reading from the Land of the Maple; Happy Thanksgiving!!
Posted by Joy at 9:43 AM No comments: 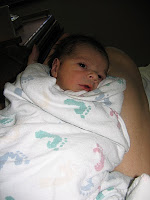 A little background: At 37 weeks we discovered that the baby was potential 'growth restricted' so we began weekly NST's and decided that if I reached my due date we would induce labor rather than risk pushing the placenta beyond its limits.
So September 12th came and went with some mild contractions, some mild nerves but largely a nice Sunday spent at home enjoying being a family of three for one last day. Went to the hospital the morning of the 13th and began cervical ripening around 9:30. The morning passed very quietly, watching TV and reading. After a couple of hours I was beginning to feel stronger contractions, that I needed to focus on breathing through, but my cervix was essentially the same so we ( midwife, Charlie and I) decided to try another dose of cytotec after letting me eat lunch.
I got the second dose around 1:30 p.m. and it hit like a brick, by 2 p.m. I was having strong contractions every 2-3 minutes with very little break between which was more than the baby could take, so by 2:30 I had an IV, and supplemental oxygen, in an attempt to prevent the fetal heart rate decelerations which were happening with every contractions, at 3 p.m. I was given Terbutaline to try and stop the contractions and give the baby a break. That hour was such a scary roller coaster ride of almost instant strong labor, worrying about the baby and wondering if any moment the decision for surgery was going to be made. Throughout all of this C. was amazing, supportive and absolutely my safe place.
The medication, IV fluid and oxygen worked and the contractions spaced out and the baby's tracing started to look better so we decided to wait a half hour and then switch to pitocin for contraction stimulation, the midwife also attempted to place an internal monitor for baby's heartbeat, I was not dilated enough but she did probably come very close because about twenty minutes later my water broke.
So at 4 p.m., we collectively took a deep breath and started pitocin which within an half hour had the strong contractions back (though for some reason they weren't tracing which lead to a small meltdown by me that I was having these strong contractions and no one would believe me because the tracing did not show anything ~ my midwife and C. assured me that it was abundantly clear by palpating my abdomen how strong the contractions were) and so were the heart rate dips by the baby, so I tried different positions changes in the hope of improving my and the baby's experience of the contractions.
Around 5:30 p.m. my midwife again wanted to try and put internal monitors in to monitor the baby closer and also potential start an amnion-infusion (infusing fluid into the uterus in the hope of improving the baby's heartbeat during the contractions) ~ and I decided it was time for an epidural, I wanted to be able to be in whatever position the baby liked best and did not want to worry that the need for surgery would happen so fast that I would have to be asleep. So I moved back to the bed and waited for anesthesia to come, ironically the tracing began to improve and the decision to place internals was postponed until I was more comfortable.
So by a little after 7 p.m. I had an epidural which had given me the shakes but otherwise was working well and the midwife I knew best had come in special for attend the rest of my labor and birth. Around 8 p.m., she placed the internals and started the amnion-infusion ~ I was 4-5 cm dilated and we joked that the race was on to see if I would dilated to 10 before the baby said 'uncle'! I then napped as my support team grabbed some food, later we chatted about life and kids when the baby's heartbeat took another long dip ~ my midwife wondered if I should flip to the other side and I suggested that she check my cervix since I was starting to feel pressure with contractions ~ blessedly I was 9 cms and stretchy at that ~ so after a long afternoon of worry a vaginal delivery seemed within my reach.
I started pushing around 9:40 and at 9:53 into his fathers hands came Liam, who than came to rest on my abdomen for a few moments before being checked out by the nursery team. Despite complaining about nearly every contractions, he looked great and got a perfect score on his first test (Apgars). We all got some insight on the reason behind his small size a few minutes later when the placenta delivered and was found to have a marginal or Battledore insertion of the cord, meaning that instead of inserting in the center of placenta as it should this cord had inserted on an edge and partially off the placenta onto the membrane. Eep! Ironically after all the worrying about his size, Liam weighed in at 6 pounds 2 ounces which put him just one ounce smaller than his sister.
Blessedly at that point it became very joyful and routine as we made phone calls and began to cuddle and love on our son.
* Amusing Aside* Both of my kids were born on a Monday night just before 10 p.m. (9:44 and 9: 53 respectively)!
Posted by Joy at 3:46 PM 3 comments: 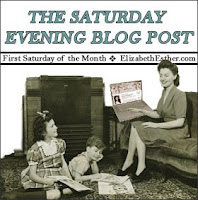 It is the first Saturday of the Month and time again for The Saturday Evening Post and to look back to the past months posts. I chose my Quick, Quick Takes as a great summary of a busy and very important couple of weeks.
Please visit Elizabeth Esther and enjoy the rest of this months round-up.
Posted by Joy at 3:37 PM No comments: