Thanks for visiting, please enjoy the host round-up at Conversion Diary hosted by Jen
Posted by Joy at 10:48 AM 2 comments:

Wordless Wednesday: Back to School 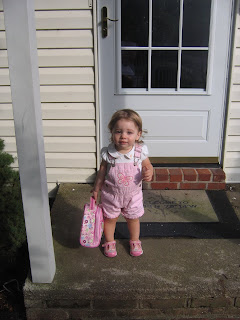 Enjoy the more Quick Takes at Conversion Diary hosted by Jen
Posted by Joy at 10:22 AM 1 comment:

Which nearly completes what I had hoped to get done before the semester begun and I resume my teaching responsibilities.
3.Mantained goal weight for a month which included a vacation, and hot humid weather which does not inspire one to exercise.
Today I am so thankful:
for friends who listen, respond and motivate
central A/C
that Charlie's two weeks of working round-the-clock are nearly over
ice coffee
that I am loved and forgiven and welcome at my Heavenly Father's feet
new words spoken with glee from E.
Have a blessed day and remember to celebrate that good that is you.
Posted by Joy at 10:29 AM 4 comments:

Born in the early seventies, I have worshiped my entire life in the post-Vatican-II Church, and have heard the story of the papacy which was to be a quiet transition, and in fact called the worldwide Church to council.  So when given the chance to read more about Pope John XXIII I leapt at it, and am now very happy I did.

This biography by Patricia Treece is a wonderful balance of Pope John XXIII's (or Angelo Roncalli, as he was known for much of his life) public and private life.  Personal stories from friends and entries from his journal are put in context against world events, as Angelo serves during WWI as a soldier and chaplain, and during WWII as apostolic delegate in Turkey and Greece.  The chapters on his papacy discuss his ongoing work towards Christian unity, begun during his assignments in heavily Orthodox regions of the world, and his attempts at diplomacy with Soviet-bloc leader Khrushchev to improve the lot of priests behind the Iron Curtain.  It was an enjoyable read; I came away feeling as if I not only knew the facts of this amazing life but some of what motivated, inspired, and drove his life journey in faith.  Examples of his generous, cheerful spirit anchored in a simple, solid mission of charity and service to the Cross filled the pages.  Treece is not presenting a perfect person – some of his faults are discussed – but rather how a commitment to strive for holiness guides him throughout his life's challenges.

While I did not come away from the book with a better understanding of why the council was called – his motives are not discussed – I did come away grateful for the opportunity to learn more about this extraordinary man, to read some of his writing, and to hear what those who knew and worked with him thought and felt about “The Good Pope”.

Find the rest of this weeks Quick Takes at Conversion Diary hosted by Jen
Posted by Joy at 10:18 AM 3 comments: 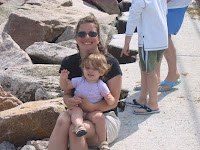 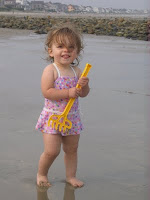 Today I am so thankful:
for sunny days and cool evenings
the opportunity to watch toddlers discover the ocean
fun times in the pool with family
"Scoop Deck"
delicious meals prepared together
Read and celebrate more small successess at Faith and Family Live
Posted by Joy at 10:17 AM 1 comment: