The good news is I'm reading almost everyday again (by which I mean books as oppose to web surfing which never stopped and still hasn't but is now perhaps in better balance), however am currently reading a couple 500+ pagers and at 10-20 pages a day who knows when I will finish ~ so done or not I'm sharing...

In the category of better late than never we have Outlander by Diane Gabaldon which for the few of you who don't already know is about a young British woman who while on a second honeymoon in Scotland in 1945 finds herself having traveled 200 years back in time when she explores a stone circle.  Her experience as a war nurse helps her find some footing as a healer with the local clan.  I'm currently about halfway thru and am enjoying it enough that I have already bought the next book though time will tell if the series holds my attention enough to last the eight books the series currently stands at.

And so while reading on the Kindle I'm transported to the Scottish Highlands of 1743, when I pick up a book it is only 1713 though I'm still surrounded by Jacobites in The Firebird by Suzanna Kearsley in which a couple minor characters in The Winter Sea (that I talked about here) are now our main characters and are bound for Russia but have only gotten as far as Belgium currently.  Similar to The Winter Sea the historical story is being told through the paranormal visions of a modern characters; I'm finding the device much clumsier this time around and am wishing the author would spend more time telling the historical story than focusing so much on the modern character's (an antiques buyer named Nicola Marter) anxiety about having visions. Time will tell. 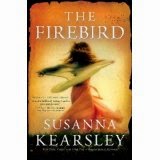 Please head over to Housewifespice for more WWRW.
Also linking up with the Modern Mrs Darcy for Twitterature.

Have also finally signed up with Amazon Affiliates so if you would please clinkity-clink the links.
Posted by Joy at 8:02 AM