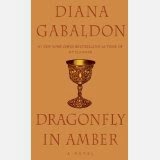 Linking up at Jessica's and sharing what I've been reading

Recently finished Dragonfly in Amber the second book in the Outlander series by Diana Gabaldon.  This one starts in 20th Century Scotland where our heroine Claire is visiting with her daughter, having decided following the death of her husband of that century (Frank) to find out what happened to Jaime her husband in the 18th century. During the visit after finding his grave Claire tells her daughter the story of traveling back in time; and we the readers find out what happens from the time the original books ends till she attempts to travel back to 1940's Scotland and the life she left.  Overall I felt this one dragged a bit more than the original but Gabaldon definitely writes a good dialogue and develops the characters solidly enough that through many twist and turns their actions seem to hold true. While I didn't like it as much as the first I did like it and will most likely at some point read the third but as each book averages 900 pages there are a few I'm planning on reading first.


For example at the moment North and South by Elizabeth Gaskell on the recommendation of Anne of Modern Mrs Darcy and as part of her reading challenge.

I also recently finished A Book of Saints for Catholic Moms and wrote about here.

Now please head over to Housewifespice for more WWRW
Posted by Joy at 10:26 AM