10 Things about Me and My Better Half 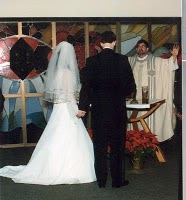 Betty Beguiles is asking us all to participate in this fun post, so here goes
1. We met at the Newman Center of the university we were both at; me for undergrad and him for grad school
2. We were friends for about a year before we started dating
3. We dated for eight years before getting engaged
4. He proposed on a day trip to visit the Alamo (we were living in Houston at the time)
5.Two weeks before the wedding a big part of the church ceiling came down, closing the church temporarily
6. So we married in the chapel where we had met ten years before
7. We love the ocean and so went to Prince Edward's Island for our honeymoon despite many people thinking we were crazy ( We got married at the end of December)
8. Four years later we won a trip to Hawaii, that was nice too!
9. We both LOVE ice cream and could eat it every day
10. 18 years together, 8 years married, 2 kids later: his arms = my happy place
Posted by Joy at 9:08 AM